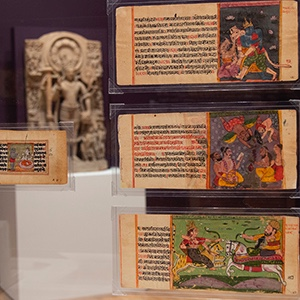 Hand to Hand: Painting and the Animation of History in Northern India


This exhibition features works from KAMâs collection of exquisite paintings predominantly from Rajasthan and the Punjab hills, in the northwestern region of the Indian subcontinent. Many of these works were commissioned by royals of the Rajput or Hindu, princely courts that came under the suzerainty of the Mughal Empire between the late 1500s and 1800s. Their enthusiastic arts patronage led to the flourishing of a wide range of regional painting styles and subjects. Especially prevalent are images drawn from the great Hindu epics in which stories of love, longing, and devotion are recounted through the deeds of Hindu deities and their avatars on earth. Also popular and showing the centuries-long commingling of Rajput and Mughal artistic preferences, are depictions of court life and aristocratic portraiture. The exhibition also features a selection of richly illustrated, devotional narratives commissioned by patrons as acts of piety, and to accrue divine merit for the next life. While local Indian painters had been producing illustrated texts on horizontal palm leaves for Jain, Buddhist, and Hindu devotees from as early as 1000 CE, the introduction of papermaking from central Asia via the expansion of the Mughal empire freed artists to work in larger, vertical page formats. However, Rajput paintings were not bound or displayed on walls. They were held close to the body, to be viewed intimately, one at a time, then shared with companions by being passed from hand to hand. Many were also passed on to friends and allies and traveled long distances as precious gifts. Devotional paintings were also created for pilgrims at temple sites who carried them on their journeys home. Others were used as visual aids in itinerant storytelling, or for prayer and recitation. Many artists were themselves itinerant, working in different court ateliers over their careers. Another kind of âmobilityâ is found in the almost synesthetic blending of musical, literary, and visual metaphor that animate the images themselves. From Hand to Hand explores the performative dimensions of these evocative paintings. The exhibitionâs related programming asks more broadly how these works narrate themselves into the contemporary politics of place and identity in South Asia today. KAMâs collection of Indian paintings was built through the generous donations of distinguished collectors George P. Bickford, Alvin O. Bellak, and Rachel and Allen S. Weller, between 1965 and 2003. A selection of these works was recently conserved through a grant from the E. Rhodes and Leona B. Carpenter Foundation. [Curator: Allyson Purpura, with research assistance from curatorial interns Yutong Shi and Samit Sinha]

Baramasa painting: The Month of Chaitra

Noblewoman Smoking a Hookah with Her Attendants

Maharaja Receiving a Mission from the Hill States and Persia

The Emperor Jahangir, as a Youth, Visiting a Holy Man

Scene from a Ramayana, Rama Sita and Lakshman Visit a Sage

Portrait of a Seated Raja

Scene from a Bhagavata Purana: Krishna Spies on the Bathing Gopis

Illustrated folio from a Birha Poem of Separation

Portrait of a Seated Raja Under a Canopy

Portrait of a Standing Raja at Hunt

Portrait of His Royal Highness of Rampur, Gulab Singh

Nobleman on Horseback with Attendants

Illustration or Scene from the Mahabharata: Banasura and His Demon Army

Illustration from the Sangrani Sutra

Illustration from a Bhagavata

Portrait of Bhim Singh with Counselor

Your current search criteria is: Exhibitions is "Hand to Hand: Painting and the Animation of History in Northern India".