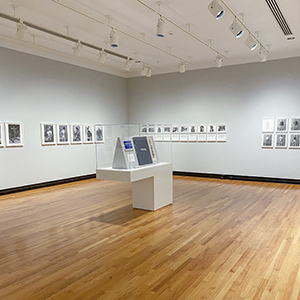 
Hal Fischer (United States, b. 1950) is a gay conceptual photographer and an alumnus (BFA â73) of the University of Illinois Urbana-Champaign. Hal Fischer Photographs: Seriality, Sexuality, Semiotics presents a first full retrospective of his work, showcasing all his photographic series, which were created in San Francisco during the late 1970sâthe heyday of gay liberation. The exhibition includes a generous selection from Fischerâs earlier work (some of it produced in Urbana), which has not been publicly displayed in decades. This earlier work contextualizes Fischerâs development as an artist, from his student days at the University of Illinois to his creative maturity in San Francisco. Viewing his famous photographic seriesâGay Semiotics (1977), 18th near Castro St. x 24 (1978), Boy-Friends (1979), and Cheap Chic Homo (1979)âin light of earlier work makes clear that Fischerâs concerns with portraiture, homoeroticism, formal experimentation, and the tensions between word and image, were present in nascent form at the start of his career. A retrospective view likewise amplifies the viewerâs appreciation of Fischerâs signature visual wit: his images of gay SM iconography document a sexual subculture while also provoking amusement. In the thick of San Franciscoâs conceptual photography ferment during the late 1970s, Fischer pursued his image making in three compelling directions simultaneously. Finding himself âat the center of the gay universe,â he began creating more frankly sexual photographs. Second, he focused intensively on the potential of photographic series, wherein visual meaning derives as much from the relationships between and among photographs as from within any single frame. Third, his heady encounter with the linguistic and philosophical concepts of structuralism during this period encouraged Fischer to experiment with the connections between photography and language. Together these developments led to his iconic photographic series Gay Semiotics, in which the subterranean codes and insignia of gay cruising are elevated, not without irony, to a comprehensive sign system. Tongue in cheek, Fischer presents the photographer as an ethnographic explorer, cataloguing and decoding the mating rituals of a distinct urban tribe. His photographs of 1970s gay male life capture a pre-internet era, before online dating profiles, hook-up sites, or Grindr. Fischerâs images subtly reveal how gay menâs visual codes for telegraphing desire resonate withâbut also clash withâthe visual codes of photography. His work holds special historical interest because he stopped making photographs around 1980. Fischerâs photographs preserve a unique era of sexual experimentationâand, retrospectively, sexual innocenceâthat ended tragically with the onset of the AIDS epidemic in 1981. This exhibition provides an opportunity to witness and appreciate the full scope of his photographic career. [Guest Curator: Tim Dean, James M. Benson Professor in English]

A Traveller from Boston [Text]

A Traveller from Boston

Signifiers for a Male Response

The Merchant down the Street

The Merchant down the Street [Text]