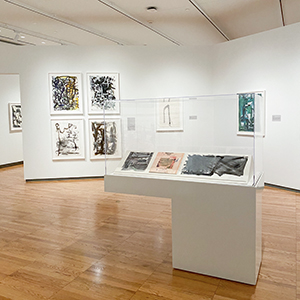 
Louise Fishman (United States, 1939-2021) was an established artist known for her ambivalent engagement with male-centered abstract painting traditions. Her physical and process-driven work remakes the abstract expressionist gesture and the minimalist grid into tools that communicate history and emotion centered in her identities as Jewish, feminist, and lesbian. A Question of Emphasis: Louise Fishman Drawing is the first career spanning exhibition and publication of Fishmanâs works on paper from 1964 to the present. The project includes more than 100 works from the artistâs archive that have rarely been exhibited alongside significant institutional and private loans. Citing John Cageâs response in 1965 to the question, âwhat is drawing?â A Question of Emphasis encompasses collage, oil and wax, thread, acrylic text, ink, charcoal, printmaking, oil stick, watercolor, and tempera in Japanese-bound Leporello (accordion) books. This full range of mediums foregrounds Fishmanâs robust and dedicated practice of works on paper, which have never been studies for her large canvases. Instead, Fishman used drawing to think through physicality, materials, and intimacy on a different register: generally small- and medium-scale, often sculptural and tactile, and aligned to her particular historical contexts and her communities. A Question of Emphasis examines the relationship between artistâs biography and drawing through feminist and queer perspectives. Fishmanâs drawings are distinctive within her full oeuvre because many are dedicated to loversâan illustrious network of lesbian writers, scholars, and critics that include Bertha Harris, Esther Newton, and Ingrid Nyeboe, Fishmanâs spouse and longtime partner of the late critic and writer Jill Johnston. Fishmanâs works on paper also honor the artistâs greatest teachersâPaul CÃ©zanne, Piet Mondrian, Franz Kline, John Cage, Eva Hesse, and Agnes Martin among them. Some works are collaborative, including prints Fishman made using her artist motherâs collagraphic plates, and her Angry Women acrylic text series made for friends and muses during periods of feminist consciousness raising in the 1970s (Fishman was a member of the activist groups Redstockings and Womenâs International Terrorist Conspiracy from Hell [W.I.T.C.H.] and editor of the Heresies journal issue on lesbian art and artists). Drawing is often perceived as a window to an artistâs interiority and a spontaneous activity that happens more readily than painting on canvas. This project is a curatorial experiment that instead follows Fishmanâs lead, through drawing, to convene a community of living and historical figures that are integral to the construction of self. While centered on the artistâs hand, Fishmanâs works on paper are in fact radically open and give audiences a strong perspective of artmaking as a world-making project.

Your current search criteria is: Exhibitions is "A Question of Emphasis: Louise Fishman Drawing".