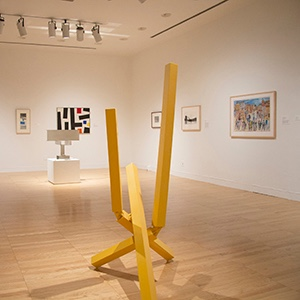 
By highlighting KAMâs strong holdings of work from artists practicing in Chicago during the 1930s through the 1980s, this exhibition considers the problematic nature of art historical categories and explores what other stories are missed by perpetuating a single narrative. Coined by art writers and critics in the mid- to late twentieth century, the so-called Chicago School consisted of two groups of artists. The Monster Roster created expressive psychological works inspired by classical myths and ancient art. The Imagists are distinguished primarily by their idiosyncratic figural style, which often incorporates crude humor and aspects of Chicago vernacular culture. These artists diverged from the broader mid-century trend toward abstraction and were largely ignored or dismissed by critics in New York, who were defining the canon of modernism. However, what happens when the categorization and labeling of a group of artists is unwanted or contested? This exhibition considers the problematic nature of art historical categories and explores what other stories are missed by perpetuating a single narrative. While the narrative of a strong figural tradition in Chicago is not unfounded, artists working in the city produced diverse, personal aestheticsâmainly due to the layout of neighborhoods in the city. Although many artists worked in isolation and regularly shared difficulty finding venues for showing their work, they collectively established alternative exhibition spaces. They regularly exhibited with fellow students from various art schools, including the School of the Art Institute, the New Bauhaus/Institute of Design, and the University of Chicago. Educational art programs and fine art institutions, such as the Hyde Park Art Center and the South Side Community Art Center, were instrumental in creating vital networks for artists who often worked independently. Thus, the notion that artists in Chicago held exhibitions out of necessity rather than a passion for a particular ideology further contests the idea of a clearly defined Chicago School. Between the Buildings also reflects Krannert Art Museumâs strong collection of works by Chicago-based artists developed by Stephen Prokopoff, the museumâs director from 1983â1991. As a collections-based exhibition, it cannot fully tell the stories of political activism, feminist art, mural and street art, or experiments in new media that were vital to artistic practice in mid-century Chicago. But by decentering the prevailing âChicago Schoolâ canon, the exhibition reveals the many stories that unfolded between the buildingsâthe structure of neighborhoods, artistic collaborations, and connections made through educational and fine arts institutionsâcreating a more inclusive/varied/dynamic history of art in Chicago at this time.

Blowing his Top in Washington Park

Proposed Chapel in the Form of a Swedish Extension Plug

Looking at a Curve Ball in Cuernavaca

The Truth and Other Explanations

At Jennie Richee... By Rising Waters Under Their Shelter They are Driven Further in...

I Find Hope on the Horizon of my Tomorrows

Figure on a Platform

One Way to Quarter a Pear

It's Getting Too Crowded in Here

Your current search criteria is: Exhibitions is "Between the Buildings: Art from Chicago, 1930s-1980s".